Alison and John hosted this month's meeting at their home in Evanston.   Thank you John and Alison!  Erik brought some home made pretzels, while the hosts provided sausage and cheese and a variety of  German mustards (Dusseldorfer and Lowensenf).  New member Larry brought some chocolate caramels, and grapefruit and vodka sorbet, for dessert.  We also welcomed new member Mark. 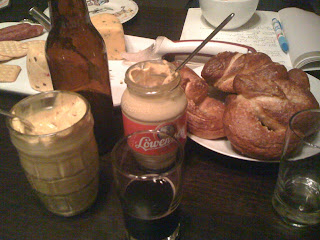 Alison and John shared their Saison, brewed from a recipe from the March 2011 issue of Zymurgy.   It's a very good representative saison, good color, nice white head, effervescent, with just a hint of sour.   Jason brought both a Roasted IPA and a Bohemian Lager.  The IPA tastes a bit like a brown ale with some hops hiding underneath.  The lager is a little cloudy (not surprising as it's an all-grain with no clarifying agents).  It's also a little funky.  (Says Jason - I think it's just a strong lager taste that might mellow, but I think there's also the chance that it was oxidized, or fermented too warm.  But when it's cold, it tastes like a strong German lager.)

We also discussed getting hops rhizomes for planting, options for building a hops trellis, converting freezers into lagering units, and maybe going in together on some kegging gear.

We still don't have a name.  We need a name by the end of the next meeting.  Suggestions?

In addition to home-brews, we shared a great variety of craft beers, including:

Short's (out of Bellaire, MI.) Huma-Lupa-Licious, a nice hoppy IPA,

Alison shared a Half Acre Crusch, a variation of kölsch style beer.  After reading some reviews at Beer Advocate, I understand better what Half Acre was doing with this beer - I think it's a good light ale, but different than what I often expect from a kölsch.

Other beers we sampled included Shiner Black Lager, Rogue Chocolate Stout, and Arcadia Flying High Rye.   All excellent; I particularly liked the rye beer, and the chocolate stout would make an excellent digestiv. 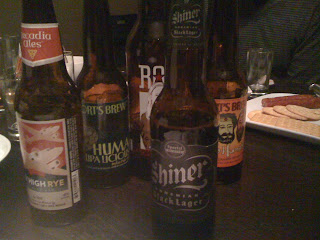 We discussed visiting a brewery for our next meeting (or maybe between meetings?), maybe going to Haymarket, Revolution, the Local Option bar, or even Erik's distiller friend's space.

Finally, we decided that we should meet the Third Tuesday of every month, making the next meeting May 17.  I'm happy to host unless someone else would like to take a turn.  We should have a few beers to taste test and compare, including lagers (from Brian and Jason), saisons (from Alison and Jason), and other beers that are in production.

As this is traditionally Maifest season, if there is enough interest I'll prepare some German food for the meeting.  I even have some Bock beer that's been quietly lagering . . .
Posted by Jason Betke at 11:40 AM