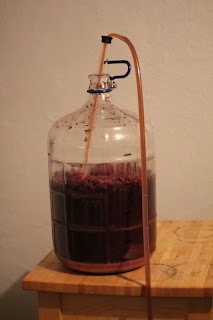 Bottled the Two Berry American Wheat tonight.  We lost power for a few minutes during bottling and I "lost" about two bottles into my overflow container, so I'm drinking it while I write this post.  Cheers!

The beer sat on the fruit for one week.  Activity in the overflow tube stopped after three days, and going on gut instinct I think it was time to bottle it.

Thee beer is VERY dark - a good sign.  It smells like berries, tastes a little bit like a fruit beer, and has a good fruit aftertaste.  I can't wait for it to carbonate and chill.  I expect a good beer. 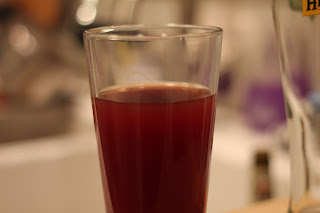 Brewing this beer is making me very nostalgic.  My grandparents had a mulberry tree in front of their house in Valley Stream, NY, and we kids used to play under the tree, and even eat the berries, in the summer.  My grandmother also kept a grape vine which she used for jelly, and my father made wine from the grapes a few times.

I guess I'm carrying on the tradition, as I used mulberries (2 lbs, collected over a few weeks) from a tree in my own front yard in Chicago.

Now to wait patiently while it bottle conditions.  Tomorrow I brew my all grain dry stout I'm planning for St. Patrick's Day, and next week I'll do an extract Bock I can lager a few months for, in time for Maifest!
Posted by Jason Betke at 8:09 PM No comments:

I'm making an American wheat beer, using 2 lbs of mulberries picked from the tree in front of our house, and two pounds of frozen blackberries. 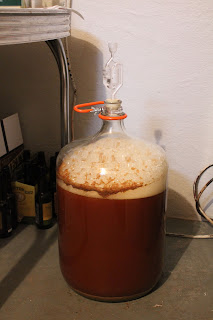 For some reason the beer was slow to ferment.  I think my basement temp of 67 degrees contributed to that.

Anxious to get the beer onto fruit, I racked the five gallons of beer onto the four pounds of fruit.  Or at least I tried to.

I primary brewed in my 6.5 gallon carboy, so I had to use a 5 gallon carboy for secondary fermentation.  Big mistake.  I left about 2 quarts of beer in the old carboy.  (As it was all the muddy stuff in the bottom with the yeast, and the beer was still a little active, I decided not to try and bottle it.) 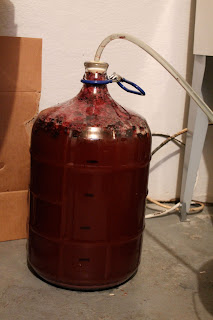 I had broken up the frozen fruit into pieces and got it into the carboy using a big funnel and skewer.  I didn't sterilize the fruit.  I guess I'm experimenting to see if the alcohol in the beer (4.7% so far) and freezing the fruit is enough to kill most of the bad guys.
We'll see.

The 5 gallon carboy was filled to the brim with beer and fruit.  I was stupid and put a regular airlock on it - which overflowed in about 4 hours.  I switched to an overflow tube and so far it's bubbling nicely and the beer seems to be fermenting again.
I have no idea how long this will take.

I'll do a hydrometer reading in a week, then every few days, and wait to see when it stops.  I'm guessing the alcohol content will rise a bit more.
Next on the horizon - an all grain, dry stout.
Posted by Jason Betke at 8:37 AM No comments: