At our second Northside Homebrew Club meeting we tasted a nice variety of home and commercial brews.  Eric B. brought a few of his homebrewed Double IPAs, his first homemade beer, made from an extract and partial mash recipe.  We all agreed it was a great first beer, hoppy and balanced.  Eric is making the leap to all-grain brewing with a Bell's Hopslam clone, using his own homemade copper mash-tun.  We wish him good luck and high gravity readings!

I was so impressed by Eric's IPA that I brewed a quick extract recipe Friday evening, May 5.  Here's the recipe I used:

From the Papazian Palilalia India Pale Ale recipe, with some adjustments:

(It's bubbling nicely - so nicely it bubbled up into the airlock, which I had to swap out for a clean one this morning . . .)

Back to the meeting:

I shared my all-grain "stout," which came out very thin - more like a session brown ale.  Still has lots of roasted oatmeal flavor, but not the body of a stout.  I also shared my "California Common" lager, which has a nice lager taste but is a little sweet and malty for that style.  Remains highly drinkable and they are disappearing quickly from my basement.

Erik G. and Alison brought a bottle of their Oktoberfest from last fall, which has aged well!  A good example of a malty brown German lager.  Alison also brought along a bottle of her Ha Ha Holiday ale, which she thought had some off flavors originally.  I think it tasted like gingerbread, and it would go great with desserts.

We tried a few commercial beers, including Goose Island's peppery Pepe Nero (not our favorite - some of us thought it tasted a little ashy), Harpoon IPA ( a very pale colored ale, almost tasted like an IP "lager" to me), a Schneider Weiss, and finally, the strangest beer of the night, a Quelque Chose cherry and brown ale from Unibroue. 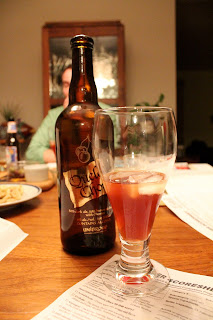 We opened the bottle and were surprised to find it "flat."  It tasted strongly of the fruit, almost like a juice.  We thought it might have gone bad.  But after reading reviews on Beer Advocate, we discovered that the beer is almost an aperitif!  It can be served chilled on ice (as we had it), or even warmed up Après-ski, as the bottle suggested.

Reactions to the beer were mixed.  I decided I liked it, but then again I like fruit beers.  It was definitely something different.

Eric B. also told us of his visit to breweries in Colorado, including Trinity Brewing Co. and Phantom Canyon.  We discussed other regional beers including Short's Brewing in Michigan and New Glarus in Wisconsin.  It got us all thinking of a beer road trip . . .

Finally, we agreed on doing a Saison as the next club beer.  Alison will do an extract recipe from the latest Zymurgy, and I will attempt an all-grain version of the same beer to compare.

We haven't yet planned the next meeting, or picked a club name yet.  At the next meeting we might be able to preview my hybrid bohemian-german all-grain Pils and Brian's  partial-mash Hoppy Helles.  And my quick IPA might be ready as well.

Until next month!
Posted by Jason Betke at 10:16 AM No comments: